Culture Agora, our multilingual free-accessible platform dedicated to arts, culture and creative industries, is certainly our largest long-term project. This user-friendly online meeting space creates visibility and encourages connectivity for creatives and organisations within the cultural and creative industries who are often isolated and distant from useful information on the latest opportunities for them. Culture Agora is now probably the largest and most updated collection of information and opportunities on what’s happening in the creative industries in Europe and the Southern Mediterranean. 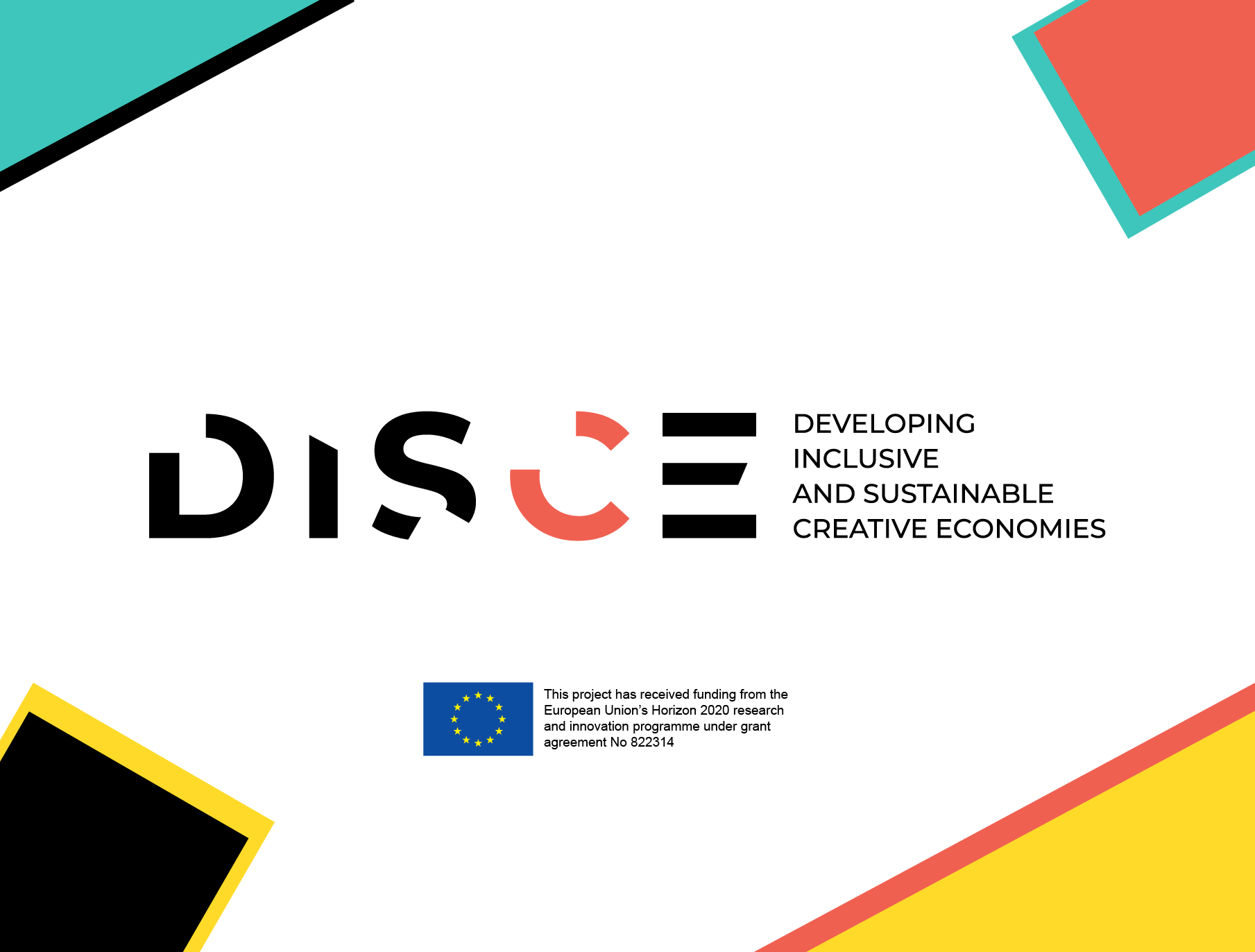 CUMEDIAE joined a consortium of well-respected social and economic research institutes, cultural managers and creative workers from six European countries, led by the University of Turku (Finland), in a three year long research project intended to reshape the economic and social perception of the Cultural and Creative Industries (CCIs). The DISCE Project (acronym for Developing Inclusive & Sustainable Creative Economies), funded by the European Commission under the Horizon2020 Programme, aims to reassess the role of CCIs as contributors to growth, quality employment, competitiveness, and to the attractiveness and social cohesion of cities and regions across the EU.

Read MoreRead Less
The DISCE project started in January 2019, and will be active for a period of 3 years. Its lead coordinator is the Department of Management and Entrepreneurship within the Turku School of Economics(TSE) of the University of Turku (UTU) from Finland. The other research members of the consortium are the King’s College London (KCL) from the United Kingdom, the Gran Sasso Science Institute (GSSI) from Italy, and the Stockholm School of Economics (SSE) in Riga Latvia. CUMEDIAE, in strong collaboration with Trans Europe Halles, assumes the link between the research and the stakeholders, and is in charge of the full communication and dissemination of its activities and results. 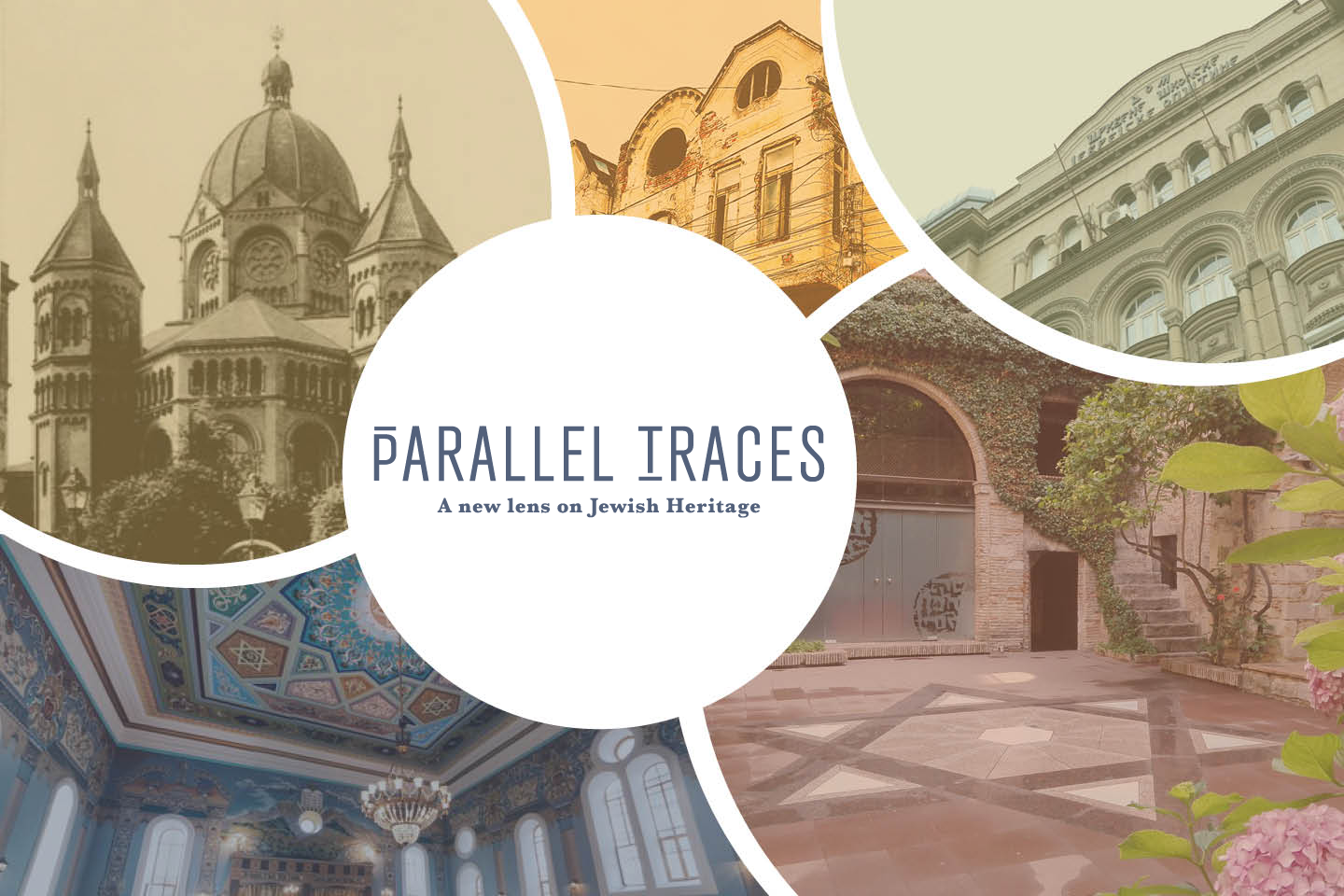 CUMEDIAE is involved in raising awareness about the European Jewish Heritage through the Creative Europe cross-border project “Parallel Traces: A new lens on Jewish Heritage.” Parallel Traces, which interacts with content and heritage in an innovative, open and plural way, offers an opportunity to unearth the traces of the Jewish cultural heritage in urban architecture and planning from the perspective of discovery by European citizens, bringing essentially a visual viewpoint. A pan-European photography contest, several exhibitions, a new app… We are having so much fun with this initiative.

Read MoreRead Less
The project discovers and rethinks the European Jewish Heritage as an integral part of European history through different mechanisms: a call for artists, off-line and online communication activities addressed in particular but not only to the areas of influence of our local partners, and at the development of a new app. A pan-European call, open to creative people throughout Europe, but focused on participating localities represented by local partners of the consortium, provides an opportunity for the creation of original digital photographic and audiovisual artwork based on clearly defined criteria ensuring the consistency between the artwork and the project’s objectives. This original digital artwork related to Jewish heritage will represent valuable artistic material and, presented in specific exhibitions, which benefit from strong cross border visibility, thus contributing in a very concrete manner to the transnational circulation of cultural and creative works.
Consortium Partners: European Association for the Preservation and Promotion of Jewish Culture and Heritage (AEPJ) (Project Leader, Luxembourg), Culture and Media Agency Europe aisbl (CUMEDIAE) (Brussels, Belgium), Imascono Art S.L. (Imascono) (Zaragoza, Spain), Patronat Call de Girona  (Girona, Spain), Tacka Kommukacije (Belgrade, Serbia), Tarbut Foundation (Sighet/Cluj, Romania), Bente Kahan Foundation (Wroclaw, Poland), Israeli House (Tbilisi, Georgia).

The action addressed weaknesses and issues related to the under-representation of women in the film sector, both on the screen and behind the camera, such as the perpetuation of stereotypes relating to the image of women in the Arab societies. The ultimate goal is to influence cultural attitudes and public opinion.

During a period of 30 months there were two open calls that supported, on a sub-granting basis, six to eight projects seeking to achieve the above-mentioned goals. The beneficiaries, particularly women, were offered training opportunities to develop their professional capacities and the possibility to take part in relevant events to foster networking at both national and regional levels.

Moreover, the project beneficiaries were given the possibility to take part in an international network of relevant stakeholders. This also enhanced their opportunities by establishing contact with European relevant operators, organisations, funding agencies, producers, etc. At the same time, a regional network for Southern Mediterranean female film professionals will be created in order to guarantee future stability.

Project deliverables: Together with the team behind the project, CUMEDIAE has carried out an extensive research and published an unprecedented handbook under the title “Gender-related Opportunities in the Audiovisual Sector”. For the first time ever, in Arabic and in English, a book puts together relevant information about gender equality opportunities in the audiovisual sector in the South Mediterranean, in different areas such as production, funding, exchange and networking, knowledge building and selected public initiatives. Click here for the downloadable version of the Handbook in PDF format.

Overviewing the cultural industries in Spain 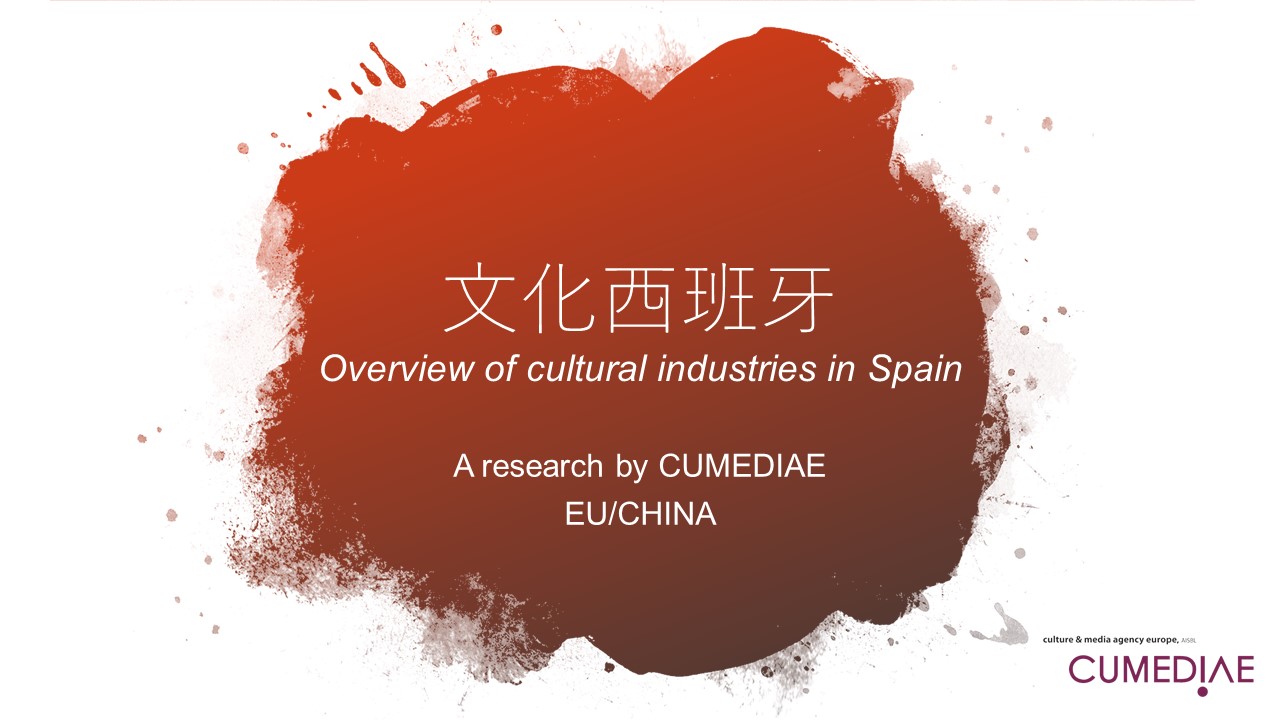 We can also be good at research and the writing of long reports. CUMEDIAE was requested by the China Institute for Cultural Trade Research and the National Institute of Cultural Development (Beijing) to produce a research presenting in detail the situation of cultural industries in Spain. The study is pending its translation in Chinese and its publication in book format in China. The study is coordinated by Ignasi Guardans, and involved a researcher in Spain, Ms Paula Velasco, and the collaboration of Maggie Wen Xu, member of our Professional Network.

Cultural Advisory Services in support of Culture and Development 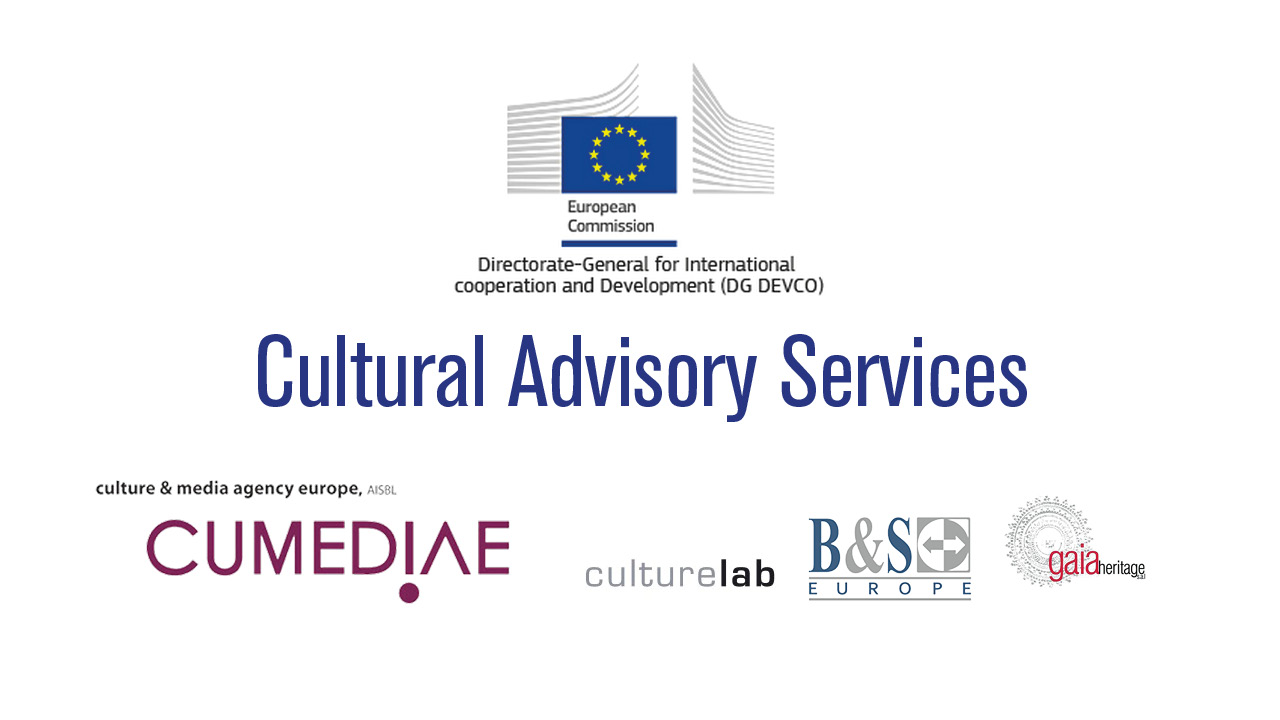 CUMEDIAE, as part of a consortium led by B&S Europe and including GAIA Heritage and Culture Lab, was awarded a contract to provide Culture Advisory Services to the European Commission (DG DEVCO).  In line with EU policies and guidelines, the consortium contributes to the adoption and implementation of appropriate and inclusive culture policies, systems and practices in developing countries, as supported by the EU in line with EU policies and guidelines. CUMEDIAE provides and coordinates its extensive network of professionals and its experience in knowledge sharing in the culture sector.

Supporting the visibility of an Enlightened Universe in Brussels 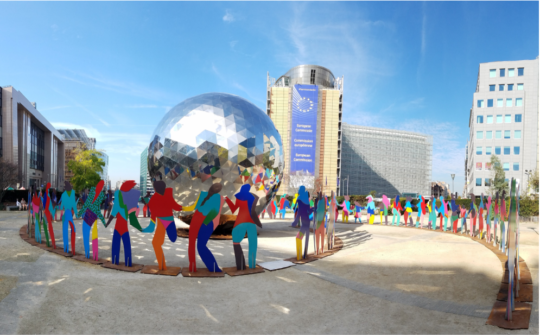 We love to help great initiatives to become as visible as possible. On the occasion of the inauguration of the Spanish artist Cristobal Gabarron’s art installation “Enlightened Universe” celebrating the 70th Anniversary of the Universal Declaration of Human Rights in Brussels, CUMEDIAE was tasked by The Gabarron Foundation with developing a full media and communications strategy. We implemented it and multiplied the visibility of the initiative, the artist, and the foundation amongst key stakeholders including those in media and in the world of the Cultural and Creative Industries.

From Morocco to social networks: online promotion of Visa For Music 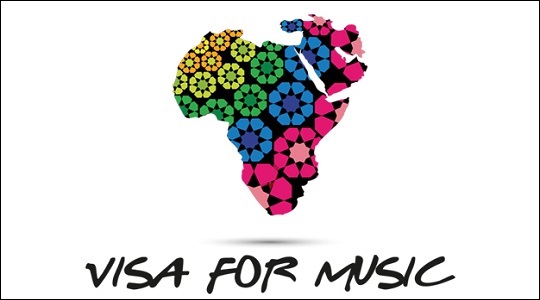 CUMEDIAE provided its communication capabilities to the Visa for Music 2015, the most important professional market of Africa and Middle-East music, settled in Rabat (Morocco). We became its solid European Media Partner, and we built a communication strategy at the service of the market and each of its activities, mostly developed through Culture Agora and social networks.

A Pan-European study on the use of cinema at schools: Media Literacy 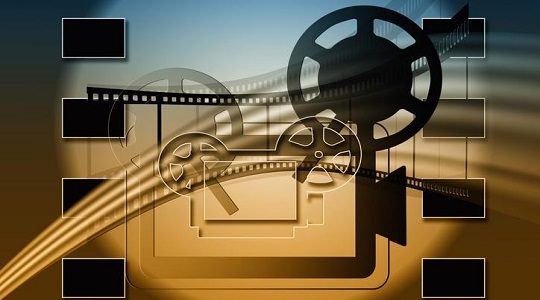 The European Commission was interested in identifying and analysing the real situation regarding the use of audiovisual content in European schools, as well as the applicable legal framework and the opinions of the industry. And CUMEDIAE built up a consortium, and was entrusted to provide that European scale expertise. The resulting report based in two years of work included a complex presentation of best practices in the matter across the 28 Member States and some of its neighbours. We coordinated a consortium with the Universitat Autònoma de Barcelona, the European Think Tank on Film and Film Policy, The European Association of Teachers, and a respected researcher from London’s Queen Mary Intellectual Property Institution’s Network. The resulting study is still the object of analysis among experts across the continent. 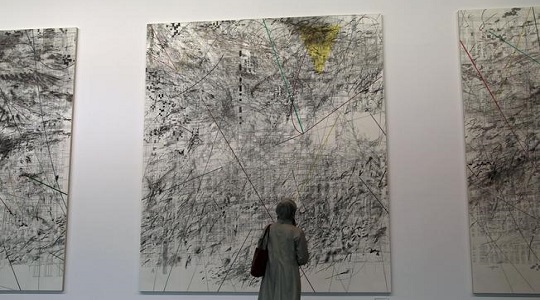 At some point the European Parliament realised it was time to treat with better respect its art collection. The “valorisation of the European Parliament Art Collection” was one of our first awarded contracts, to support the EP in the expert art assessment of its own art collection with the aim not only of evaluating its current artistic value, but also developing a short-term and long-term strategy for its best management, curatorship and communication to the European citizens. For that purpose, we put together and led a highly qualified consortium of experts (with Spanish partner Expo Actual and Around Art), and at the end we delivered an excellent report to the full satisfaction of the Parliament, with its results still in full implementation. 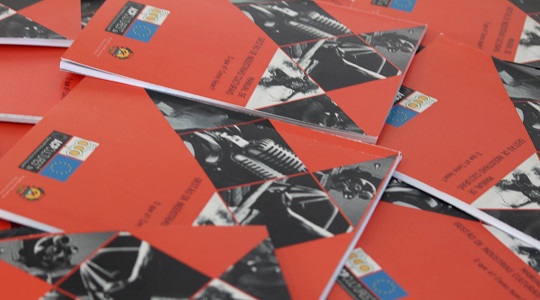 We love the crossroads of culture and development. For that reason, we were happy to receive the task of a project funded by the EU Funded program ACP Cultures+, with the objective to develop and consolidate a viable and sustainable cultural industries in Mozambique, by reinforcing their contribution to social and economic development in technical support of the Government of Mozambique. Working along with the country’s Ministry of Culture and BASA (Business & Art South Africa), CUMEDIAE contributed with studies on the situation of copyright, the legal framework for private funding of culture, and the legal statute of artists.

We use cookies to ensure that we give you the best experience on our website. If you continue to use this site we will assume that you are happy with it.OkPrivacy policy