CUMEDIAE: A Model for Communication and Dialogue at Creative Europe Showcase Conference: Culture in the Spotlight

CUMEDIAE: A Model for Communication and Dialogue at Creative Europe Showcase Conference: Culture in the Spotlight

CUMEDIAE was delighted to attend the Creative Europe Showcase Conference: Culture in the Spotlight, held on 27 October 2016 at BOZAR, Brussels. The event, with speakers, video, and live performance, demonstrated how cultural policy can transform into artistic reality through transnational partnerships and people on the ground. Creative Europe has a €1,46 billion budget to promote this transformation and the creative sectors themselves, which are responsible for 5,3% of total EU GVA. The Showcase displayed some of the European artistic and cultural achievements made possible with EU support.

As demonstrated at the conference, social media and technology platforms form an integral part of the transition from idea to practice, and thus of the ongoing success of modern arts and culture. CUMEDIAE, with its network of professionals working to advance job creation and economic growth in the creative industries, was pleased to contribute their support for Creative Europe´s mission through our platform, Culture Agora, and also by social media outreach before, during, and after the conference.

Representatives of CUMEDIAE present at the event raved about the innovative creations showcased there. They used interactive social media tools to synthesize and publish participants´ messages about the creative process, audience development, and the importance of public engagement when promoting new or niche performances. The power of Twitter to communicate globally and instantaneously allowed the team and their followers to interact with various stakeholders and to contribute to panel discussions as they occurred. Science in all its aspects was a major influence on the conference’s featured artists, so it’s only fitting for technology-forward companies like CUMEDIAE to forward Creative Europe´s message.

Culture Agora: a gathering place for the arts and culture industries

The cultural and creative industries are a tremendous economic driver that employ over 12 million persons across Europe. But as the conference demonstrated, modern artistic efforts must cross borders to stay relevant. CUMEDIAE can facilitate these efforts through its sister site, Culture Agora. On Culture Agora, arts and culture professionals come together to share ideas, develop projects, and form partnerships to increase access to public and private funding. Conference participants demonstrated success through projects that challenged the limits of geography, method, and discipline. They found support, financial and artistic, by reaching across those borders. Technology and new media have created new connections between arts and culture and other players of social and economic life. Sites like Culture Agora make finding these connections easier. 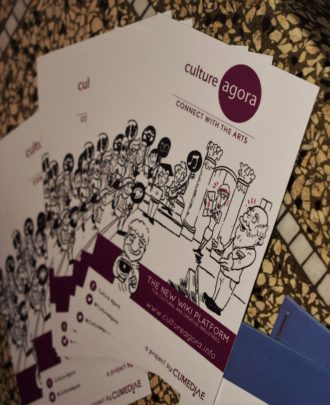 We live a moment of model change in the funding and management of culture and arts. At the same time, the contribution of creative industries to job creation and economic growth is being better understood. Not only in Europe, but also in less developed regions. Technology and new media have created new connections between arts and culture and other players of social and economic life. CUMEDIAE and its network of professionals want to be at the centre of these changes, and serve the needs deriving from them.

By Bea|2016-11-09T16:25:30+02:00November 9th, 2016|Projects|Comments Off on CUMEDIAE: A Model for Communication and Dialogue at Creative Europe Showcase Conference: Culture in the Spotlight
Go to Top